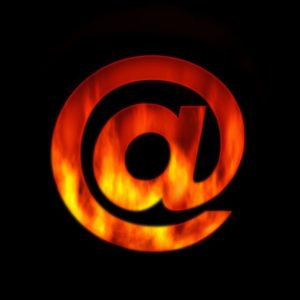 There are lots of ways to annoy people in an e-mail. One we have already discussed is not writing in a formal-enough tone, or not calling them by their appropriate name or title, or not using capital letters. Another one involves SHOUTING BY WRITING IN ALL CAPITALS, or using emoticons when it’s not appropriate.

Yet another is to prioritize yourself over everything else that may be going on in the other person’s life. When you mark an e-mail as urgent, you are saying that they should stop everything and read/act on that e-mail. You must be sure that this is warranted before you expect that of your recipient. What’s urgent to you may not be urgent to them, and if you continually send them “urgent” messages they will start ignoring them and thinking less of you (think The Boy Who Cried Wolf).

However, one of the most dangerous things you can do in an e-mail is to write a flame: that is, to express anger over something the person who you’re writing to has done, the way they’ve behaved, or something that they’ve written in an e-mail.

Never write a real e-mail when you’re angry. Instead, start by writing exactly what you feel like saying to the person in question, but in some other kind of document, or in an e-mail with no recipient or with you as the recipient. Get your emotions out!

Now, put that e-mail aside and use a different part of your brain. What is the problem here? How can you make progress? Is the relationship with this person salvageable? What do you want to happen? How can you turn what you want into something that also serves the other person? Do you think they’re misunderstanding something and that being clearer and explaining your reasoning for your own actions will help? Now, write the e-mail focussing purely on the ends you would like to achieve, not on blame or recrimination or anger.

The one thing to be careful of here is not to let your self be bullied. If you defer to someone who has behaved inappropriately (that is, if you don’t make clear that you found their behaviour unacceptable) then some people will take that as a signal that they can treat as badly as they like. So while you shouldn’t write an angry e-mail, you should still be clear (if brief) about the rights and wrongs. Do this in as factual a way as possible and, even if the person you are writing to did do something wrong, don’t assume they intended to do wrong. In other words, write the e-mail as if you are giving them the benefit of the doubt about what has happened in the past, while being clear about what needs to happen in the future, and why.

For instance, instead of saying, “Your e-mail is insulting and offensive.” You might end up saying something like, “You attributed various motives to my actions which make it clear that you don’t fully understand the situation here. Let me clarify… [explanation]. I understand that, not being in full possession of the facts, you found the situation frustrating, but I would appreciate it if – should you have similar concerns in future – you would ask rather than assume that I or a member of my team are somehow behaving improperly. We are working very hard on your behalf, and find it demotivating when you imply otherwise.” In other words, you’re still making clear the e-mail was inappropriate, but you’re not getting emotional about it. Your lack of emotion should help bring down the level of emotion on the other side: at least it will if they are acting in good faith.